As a kid I envied all the adults. They did not get homeworks. Their work was over as soon as they left office. While we, the kids had to spend the evenings and most of the weekend doing homeworks.
But the ordeal is far from over.
This is what Venky’s diary read on Friday, 14th of Aug
” 15th August is our independence day and we have been trying to teach its significance to Venkatesh. Please make sure you show him the flag hoisting and the independence day parade to Venkatesh and send us 3 pictures of him pariticipating in the independence day clelebrations. We will use the pictures for a show and tell session with all the children. Please make sure that the pictures reach us by Monday.”
“What the …… DAMN!” These were exactly my thoughts when I read the note. This was a rather difficult assignment.
First, 15th Aug was a Saturday. That’s supposed to be my wake-up-when-I-feel-like day. Since most of the flag hoistings happen by 8 am, that means not only I have to wake up early, I have to wake up EARLIER that I do on weekdays. Isn’t it torture to make my sleep deprived self do that?
Second, show him the parade!!!! Where ? WHERE? TV is banned by the school (Yes, we watch TV only when Venky is sleeping). There are no parade’s happening anywhere within the 10 km radius of my house. So, exactly where?
Third, the pics have to be sent on monday. Helloooo??? Saturday was 15th Aug so most of the shops would be closed. And sunday being sunday, most of the shops would be closed. So how do we get the prints in time?
Shucks! My worst school teacher was more considerate than this.
We toyed with the idea of NOT doing the homework. Then gave it up. I wouldn’t be able to stand you-didn’t-do-the-homework looks and polite inquiries from Venky’s teacher and more importantly, we couldn’t have let Venky feel left out in the show and tell session they were having.
So we woke up early on the Saturday, found an intitution where flag hoisting and parade was being done. Tooks digital pics. Seleted the best 3. Then ran around for rest 1.5 days to find an open studio which would do the digital printing. By Sunday evening, we had our copies and Venky took them proudly to the school on Monday.
The pics came out rather well. Here’s one for you to see 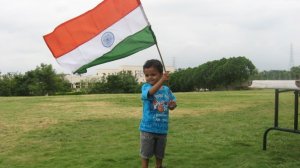 Okey, I admit I am showing off. But the homework was hard work.

You obviously got who’s the mom here.

Dads teach their sons how to pee without touching ANYTHING (yup, including the organ involved) in the loo and to hold your body in a strange convex position such that the stream still falls where it is supposed to.

Yes, you read it right.

Venky demonstrated it first and then declared “Papa has taught me!” with a proud smile.

And while I was wondering in shock …”But WHY???” Venky made another declaration – “I won’t need to wash my hands now.”

It IS a guy thing.

ETA – Vibhu could not understand what was funny about this. He went on to say “Only women can find this amusing …”. IT IS A GUYS THING

We have often heard about “Ma ki mamta” – A mother’s love is unquestioned and unchallenged in our society. It is supposed to be the epitome of affection. But now I find myself questioning it. Again. Every time I challenge Venky, he proves he loves me more than I can ever love him. He always puts me before himself. And he did it yet again.

Last Saturday, Vibhu had to pick up something from the office. He decided to take Venky along as he loves going to our office and running around the water fountain there. Once Venky was informed that he was being taken to the office, he got really excited. He hurried up with his bath and finished his breakfast quickly. He jumped around the whole house waiting excitedly for his dad.

Just as they were ready to leave, I decided to pull Venky’s leg. Venky always cries when we leave for office. That day, I was being left behind, so I did a Venky. I held him and asked him not to leave me and go. Venky said – “We’ll go and come back very quickly mommy.” This switch of roles had become interesting. I persisted – “Please Venky.. don’t go”. Venky did all the hugging and kissing he could do and kept assuring me that he’ll come back soon.

Finally his dad called him to go. As Venky took unsure steps toward the car, I pretended to cry. Venky looked at his dad for help – “Mommy is crying.”

I cannot imagine the amount of self restraint it would have taken him to say that. A 2 yr old gave up something he wanted to do so much because I was crying. I felt so humbled and was ready to cry for real now. But I smiled and said it was okey for him to go.

Venky ran off happily with is dad and had a blast in the office, but as soon as Vibhu reminded him that I was alone at home waiting for him, he was ready to return. And ofcourse he did not forget to check on me once he was back home. 🙂

My son, if you retain half the will power you have right now, you’ll grow up to be a fine man.

Look who is visiting

Find what you want